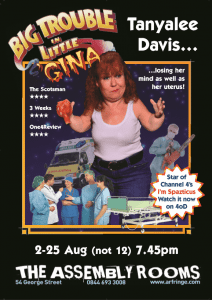 For the Edinburgh Fringe Festival Tanyalee Davis wanted to tell the story of her 2012 events which eventually led to her loosing her mind and her uterus. Performing the show exclusively in The Assembly Rooms for a month the show received lots of critical acclaim across editorials such as The Scotsman, 3 Weeks and One4Review.

You will be able to purchase this show shortly from an online store that’s coming soon. That way even if you weren’t at the fringe you still get to experience the hilarity that swept across the Fringe.

Where? : The Assembly Rooms in Edinburgh

“…engagingly and hilariously told… do go see the show”