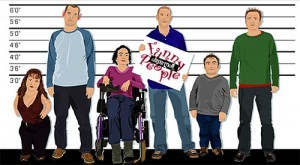 Abnormally Funny People is a group of individuals within the comedy world who are very funny but of course all have their differences. They have performed many shows across the world but mainly focussed on the UK.

For the Edinburgh Fringe Festival Tanyalee Davis wanted to tell the story of her 2012 events which eventually led to her loosing her mind and her uterus. Performing the show exclusively in The Assembly Rooms for a month the show received lots of critical acclaim across editorials such as The Scotsman, 3 Weeks and One4Review.

You will be able to purchase this show shortly from an online store that’s coming soon. That way even if you weren’t at the fringe you still get to experience the hilarity that swept across the Fringe.

Where? : The Assembly Rooms in Edinburgh

“…engagingly and hilariously told… do go see the show” 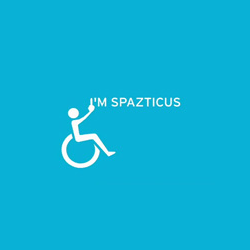 Featuring Tanyalee Davis and a whole host of other disabled talent from across the world to convene in this hidden camera show. Pranking members of the general public in the United Kingdom hilarity comes from the awkwardness and reactions of the unsuspecting general public.

When? : Broadcasted from August to current 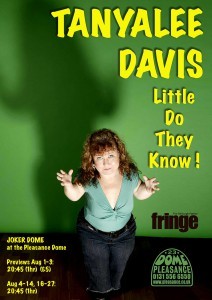 This Canadian Comedian is no stranger to the Edinburgh Fringe Festival having been here before but this is her first full hour, long one-woman show.

Her life began in 1970 and her parents were repeatedly told she would have a short life and soon die. Thanks to an overload of recessive genes she is also gifted with a mixed race physique. Is it any wonder then that she has an extremely positive slant on life?

As she towers over us thanks to a unique set this larger than life personality has us rolling in the aisles with one or two pauses for us to ponder over whether we really should be finding this funny? Or not!

Tanyalee Davis is a punch-packing stand-up. It is amazing to find out that she is a Canadian who moved to LA, because the energy and attack she has seems more New York than pastrami on rye. This year she is doing her first hour long show. And, like several in the comedy section this year, she has gone autobiographical. You really want to hear this story. It will surprise you, touch you, amaze you and entertain you hugely. What more can you ask from a show ? Tanyalee has a nuclear powered personality, Bette Midler’s hair, Queen Latifa’s ass and diastrophic dwarfism. Only 1 in 110,000 people are born with diastrophic dwarfism. What other comic on the fringe is one in 110,000 ? What it meant – in Tanyalee’s case was a 32 hour birth, the joys of Disabled Camp and a short career (no pun intended) as a leprechaun, amongst other things. Having said which, she has a BA in Criminology, is a certified scuba diver and rollerskates like a bat out of hell. Her show is caringly, cleverly crafted so that you don’t miss out on the autobiography, you get hard-hitting moments to remind you that although Tanyalee might make life at 3’ 6” look all fun, it isn’t, you get a whole load of surprises and a glorious layer of laughter on top.

This lady almost had a lawsuit on her hands when fifteen of her audience practically choked at what bothers Tanyalee about tampons. Her description of sharing a flat with a carnival worker was packed tighter than William Shatner’s corset with funnies. She performs her show standing on a four foot high box and is threatening to crowd surf the first time she gets a full house. I bet she would. Now about that full house…